(05.02.2010) Nonviolent activists from 32 countries denounced development-induced displacement and corporate violence at the War Resisters’ International (WRI) conference held in Ahmedabad at Gujarat Vidyapith. WRI, Gujarat Vidyapith, Gujarat Sarvodaya Mandal and Sampoorna Kranti Vidyalaya have together organized the conference to investigate the links between militarism, war profiteering and the patterns of development pursued across the world today. Around 175 participants from 32 countries took part in the deliberations during the 25th WRI conference. 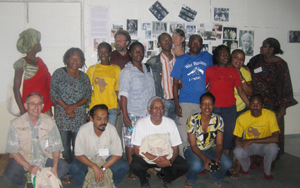 According the press statement of WRI, what resonated throughout the conference were the amazing parallels that can be seen across the world. People engaged in myriad struggles across the world discover the irrefutable link between “development”, mining and industrialization, arms manufacture and trade, militarism and war profiteering on the one hand, and displacement, loss of livelihoods, assault on traditional lifestyles and state violence on the other. This inflicts incalculable human suffering on toiling people whether they are farmers, farm or factory workers, adivasis, fisher people or daily wage laborers. These communities are thus thrust into a struggle for survival. This is true not just in India but around the world - whether it is Colombia or Paraguay in South America, West Papua in the Pacific Ocean, or Congo and Eritrea in Africa.

During the Ahmedabad triennial WRI conference, there were plenary and workshops sessions on different topics. Participants were able to discuss and debate on several issues related to nonviolence and other similar issues.

Participants from Orissa from India presented a picture of the mining-led displacement of adivasi communities in various parts of the state as well as the destruction of environment threatened by Vedanta/Sterlite in the Niyamgiri hills, or due to Hindalco in Kashipur, or to various steel plants in Kalinganagar. Bauxite mining and the aluminium industry occupy a vital position in the military-industrial complex.

There were representatives from the Democratic Republic of Congo (DRC), a country which has suffered more than almost any other from the impact of mining. It has fuelled local conflict and impacted on the livelihood of many people. One of the main mining industry is for the extraction of coltan, a mineral necessary for the production of mobile phones. Children are a major part of the workforce in coltan mining, and the fight between different groups extracting the mineral has resulted in terrible crimes, contributing to the cruelty of the internal war in the DRC.

Maguiorina Balbuena, a representative from CONAMURI (the national coordination of rural and indigenous women workers in Paraguay) told of the catastrophic impact of agribusiness on 70,000 rural workers. Everyone is well aware of the 150,000+ farmers’ suicides in India in the last decade.

Palestinians, facing a brutal and suffocating occupation by the Israeli military for many decades, are subject to a systematic effort to drive them off their remaining lands.

Colombia and its long-lasting conflict has had impacts on all levels of Colombian society. Colombian activists told the conference about the work of supporting communities displaced by the conflict, including that of urban groups working with people displaced from rural areas. The conflict also exerts a heavy and specific toll on women, whose bodies are used as yet another battle field: they are raped and suffer all types of sexual humiliations, as a measure of intimidation or retaliation against them or the men in their communities.

Expenditures on arms manufacturing and trade balloons out or control across the world. A considerable proportion of GDP is spent on it, to the detriment of people everywhere.

The continuing spiral of violence in Palestine, Jammu & Kashmir, Sudan, Eritrea, Iraq, Afghanistan, and many other places across the world, hits the toiling and the dispossessed the worst. While some of this gets coverage in the mainstream media, what is not reported is the range of indigenous, nonviolent and decentralized movements of resistance in all these places.

The conference in Ahmedabad was an opportunity to see other culture and meet highly qualified and experienced people from different parts of the world. Besides the inspirational history of Mahatma Gandhi, it was amazing to learn also what the Indians are doing to liberate themselves from poverty and challenging the legacies of inequality in their own society.

War Resisters’ International was established in 1921, and is a network of 80 member organizations in around 40 countries – all these groups are committed to nonviolent struggle against war and militarism and against the injustices which lead to war.

(12.12.2015) Eritrean Antimilitary Initiative to Abraham Mehreteab - "We are remembering with deep sadness"
...more

(09.09.2010) Yohannes Kidane, Eritrean Antimilitarist Initiative: Eritrea: The fact that the flight itself might cost the refugees lives, is telling - Statement to press conference "Eritrean deserters report about imprisonment and torture"
...more 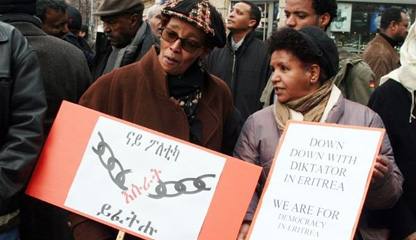 (16.02.2009) The Amerika Team for Freedom for Eritrea: "People have been kept hostage for the deeds of the government" - An Eye Witness from Eritrea
...more