Eritrean organizations call for an international day of action: Stop the War in the Horn of Africa!

(07.12.2020) Early November 2020, the conflict in the Ethiopian province of Tigray escalated. The Ethiopian government under Prime Minister Abiy Ahmed launched a military offensive against the Tigray province, after which the ruling party TPLF held an election and pushed a military escalation. Some days ago Abiy Ahmed declared the end of the war, however the conflict is still continuing.

We strongly condemn the war and oppose all ethnocide.

We condemn any involvement of the Eritrean regime in the civil war in Ethiopia. The Isayas Afewerki regime has been known since 1991 to instigate conflicts with neighbouring countries Sudan, Ethiopia, Djibouti and Yemen with war. Isayas Afewerki for this purpose uses an army, which is deployed for the aims of the regime through unlimited military service for men and women. There are clear indications that Eritrea is already carrying out extensive mobilization, including raids, in order to forcefully recruit more.

In summer 2018 Eritrea and Ethiopia signed a peace treaty that ended the no war no peace stalemate emanating for the border war of 1998-2000. At that time, more than 70,000 people died fighting over the town of Badme on the border with Tigray. On the Ethiopian side, the government was led by officials from Tigray. Isayas Afwerki’s involvement in the current war is his retaliation to the TPLF and this at the expense of the population in Eritrea and Ethiopia. The new war effort is intended to consolidate his regime and expand militarization in the country.

The war is still taking place despite the capture of Mekele the capital of Tigray. The Ethiopian Government has said the war is over, however the war is still going on in other areas of Tigray.  There are more than 150,000 Eritrean refugees that are affected in Ethiopia of which 100,000 are in the Tigray region. These Eritrean refugees fled to Ethiopia because of forced conscription and human rights violations in Eritrea. The escalation of the conflict and Eritrea’s involvement in the war has meant that they no longer have protection in Ethiopia and we are not receiving disturbing reports of forced deportations to Eritrea.

In recent years, we had to observe that despite unchanged human rights violations, European governments have increasingly granted Eritrean refugees protection of inferior quality or have even rejected them. Moreover, refugees have been forced to go to the Eritrean embassies and consulates, where they are pressured to pay a 2% tax to their country of origin and to sign a so-called letter of regret, in which they agree to accept any punishment for their flight from Eritrea. This irresponsible policy must be stopped immediately.

The war poses great dangers for the entire region, for the people living there and the refugees seeking protection there. It will have serious repercussions on the number of refugees from Ethiopia and from the region. It will shatter the Ethiopian economy. This war will bring untold poverty and perhaps famine akin to the tragic situation we witnessed in the mid-80s. It would be necessary and responsible to act together against the corona pandemic and the locust infestation in the region.

We call on all parties involved in the war to stop the war immediately, to come together at a negotiating table and to look for solutions together!

We call on the African Union, the United Nations and the European Union to put pressure on all sides involved in the war to stop the war!

Stop the war in the Horn of Africa! No participation of Eritrea in this war!

We call on Eritrean groups and organizations as well as supporters all over the world to carry out actions in their towns on December 10, 2020, the International Day of Human Rights.

Provide information about the situation in the Horn of Africa, show solidarity with the victims of the war, with war opponents and refugees.

We ask all groups and organizations to report their actions and events to Facebook HornAfrica - StopWar. 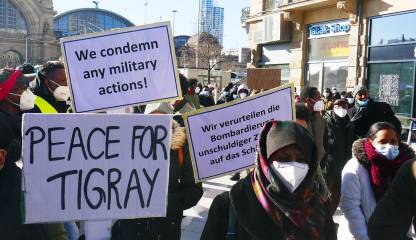 (17.11.2020) Eritrean Research Institute for Policy and Strategy (ERIPS): Urgent Appeal to Stop War in the Horn of Africa
...more 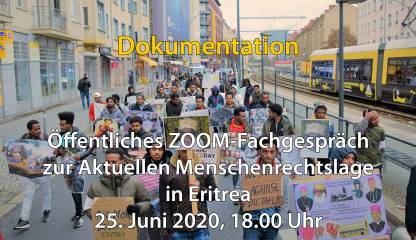